Here are a few quick impressions from Clarinetfest in Austin:
There is so much more I heard and loved, and I’m sorry that I didn’t include others. It was great to see and hear so many old friends and meet and hear some new ones at the school I did my doctorate! I am so proud of earning my DMA from the UT Austin School of Music. There are so many fine people there and I learned so much there. It really means a lot to me that the Clarinetfest was at UT - despite the humidity and almost 100 degree heat outside!
The photo above is my teacher and friend Richard MacDowell and I on Friday, the day I played. I look so happy - it must have been after I played!
Posted by Shannon Thompson at 11:20 PM No comments: 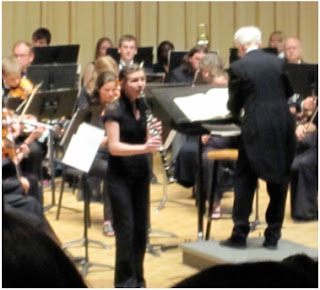 I was going to title this entry “insomnia,” because that is the reason I am writing this at 1:30am.  In lieu of ambien, I decided to continue on the off chance that someone actually reads this before next week and is inspired to hop on a plane to Austin!
As I’ve said before on this blog, I’m going to ClarinetFest this year, which is going to be held at the University of Texas at Austin July 21st-26th. Austin is my former and most favorite hometown, and I probably would have never left had I not found this wonderful job opportunity at Western Carolina University in the beautiful Smoky Mountains.
For the uninitiated, ClarinetFest is the annual conference of the International Clarinet Association. It traditionally takes place every summer two years in a row in the United States and every third year in another country. I attended my first ClarinetFest in 1989 in Minneapolis, and that experience changed my life: it showed me the real clarinet world and I got to hear SO MANY fine clarinet players. Minneapolis is where I first heard Richard MacDowell’s amazing sound and dramatic playing, and it’s what led me to study with him at the University of Texas.
Since 1989, I’ve been to ClarinetFests in Tempe, Lubbock, Norman, Salt Lake City, DC, and Atlanta. Each experience has changed me in ways I would have never imagined. As has another clarinet conference I’ve attended multiple times and highly recommend: the Oklahoma Clarinet Symposium.

I consider the ClarinetFest mandatory for any clarinetist who has aspirations to be a professional performer. I know I will get some protests from my students for saying this, but most of the clarinet students at Western Carolina University have a pretty narrow view of the clarinet world and what you have to accomplish to get your foot in the door and keep it there as a performer. They need world perspective - and ClarinetFest has it!
Yes, it’s true that at WCU I play for my students, so does the other faculty, and we also have fine guest artists here. My students also live on YouTube, etc., and that’s great, but... it’s just not the same as communing with other clarinetists from around the world and hearing and seeing great clarinetists live. ClarinetFest is where and when the real turning point in my thinking and playing occurred in my own career. It’s the point when I decided to go for it full blast and start my doctoral degree in clarinet performance.

Let me just give you a glimpse of a few of many great experiences I’ve had at clarinet conferences:
Ricardo Morales opened the Tempe conference by playing every French clarinet show piece imaginable: Bozza, Widor, Messager, Saint Saens, etc. Before that time, I always heard Saint Saens as a student piece. He really turned that conception on its head, and ever since, his brisk tempos and intensity are part of my own performances of this work.
The first time I heard Alessandro Carbonare and Andrea Dindo in Norman, Oklahoma, I remember someone (I think it was Burt Hara) suggesting on the way out that they should have provided trash cans so that we could throw our clarinets in them as we left the concert. It was that incredible - absolutely breath-taking! Alessandro was inspiring and ALL ABOUT EXPRESSION. His playing inspired me to learn the Lovreglio La Traviata Fantasy and play really softly. Alessandro’s tone reminded me of that of Harold Wright, whom I heard numerous times, but his musicianship is all his own! I’ve heard most of the best clarinetists in the world play in concerts, and I can honestly say that the top three clarinet concerts I’ve heard were played by Alessandro Carbonare. He’s the ultimate showman with no smoke and mirrors - it’s all genuine heart-felt fantastic clarinet playing!
I’ve heard many masterclasses at conventions by fine clarinetists, and there’s always something to learn from everybody. Some people who stick out in my mind as excellent masterclass teachers are Eddie Daniels (what energy!), Loren Kitt, Richie Hawley, Burt Hara, Bil Jackson, and the great pedagogue and player Larry Combs, who really knows how to put it all together.
While you are at Clarinetfest, don’t skip the competitions - plan to see at least one round of orchestral or solo competitions. There’s usually some public feedback or written comments from the judges, but just listening to the contestants is enough to teach loads of useful information to both teachers and performers.
And then there’s the exhibitors: LOVE THEM! I am as bad as the next person when it comes to collecting clarinet equipment (actually probably worse). I don’t want to be a bad influence on others, but I do want to put in a good word for my very favorite tried and true vendors that are scheduled to be at the ClarinetFest 2010:
Mouthpiece Makers: Brad Behn and Walter Grabner - excellent mouthpieces, totally different from each other, both great stuff. Brad’s doing some new mouthpiece material designs that you must try.
Buffet Clarinets: Lisa’s Clarinet Shop - my favorite clarinet chooser.
My favorite every kind of equipment vendor: Muncy Winds (Phil and his rocker wife Pam) from Western North Carolina!
Annette Luyben at Luyben Music Shop, home of the former official poodle greeter named Bonade after Annette’s father’s great teacher. Annette will find you whatever clarinet music you want.
Please feel free to contact me with any questions, or say “hello” at the convention. Barring margarita breaks (aka Mexican martini: Cedar Door - best, Trudy’s Tex-Mex and El Arroyo - often sampled and recommended), I’ll be at ClarinetFest the whole time. I’m playing Clara Schumann’s Romances at the ClarinetFest on Friday, July 23rd (my wedding anniversary) around 4pm.

Note: The photo at the top is the WCU clarinet section on NC tour in 2009. It’s totally unrelated, except everyone’s playing the CLARINET.
The photo is of my student Leanna Smith performing the Rondo from Mozart’s Clarinet Concerto with the Western Carolina Civic Orchestra. Leanna’s going to be at ClarinetFest 2010!
Posted by Shannon Thompson at 4:11 AM No comments:

Email ThisBlogThis!Share to TwitterShare to FacebookShare to Pinterest
Labels: clarinetfest 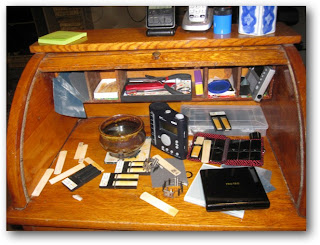 I’ve been back to practicing after a long break. It’s always difficult to motivate myself to play the clarinet to prepare for something immediate, but these less busy times are also some of the best times to read new repertoire and practice more thoughtfully.


I am a firm believer in scales and exercises and spending at least twenty minutes (usually more) at the beginning of every day’s practice doing this. This is not always popular with my students, but those who do it build a solid foundation of sound production and technical skills. I tell my students that if you only have time to practice one thing on a busy day, make it warm up exercises. Biting embouchures, messy finger technique, and overactive tongues tend to reappear if you don’t do daily, thoughtful practice in this area.


To vary my routine, I use many different materials, but I do have a few favorites: Some days when I really need to work on my sound, I spend the entire first 30 minutes on Klose low register exercises just focusing on maintaining a round embouchure and strong air. If I need to get my fingers moving and have limited time to warm up, I play the Klose scale etude (all majors and minors in one etude). This is memorized, so I don’t have to find the music. See this IMSLP link to download a public domain version of the complete Klose. The scale etude is on page 97 and the low register exercises starts on page 177.


My favorite Klose exercise is a progressive interval study I found in an obscure French edition that I will share with you if you would like to email me. It’s definitely advanced reading - with all the accidentals, double flats, and such, but it’s well worth learning to build up your ability to keep the embouchure steady and air going through large intervals. Another essential that I carry with me everywhere is Paul Jeanjean’s “Vade-Mecum” du Clarinettiste. I play the first three exercises at least twice a week. The first exercise is for isolating finger technique and it’s easily memorized. The second exercise concentrates on the left hand and the third exercise concentrates on the right. I promise you that if you do these with great care to keep your fingers close to the clarinet and moving economically (from the back knuckle), you won’t find anything better to improve your finger technique. Warning: this book also includes a lot of accidentals, and you’ve got to do some French translation. See http://www.vcisinc.com/clarinetmusicstudies.htm to find the Jeanjean. It is not public domain, so you need to purchase it. I’ve bought two myself, since the first got so worn from use.


The photo above shows my practice desk at home. It’s originally a child’s desk, but it works great for my purposes. The roll top allows me to protect my reed water from becoming a cat water bowl!
Posted by Shannon Thompson at 11:36 PM No comments: