I am busy at home going over all my old notes to resurrect my research on Daniel Bonade and also get ready for my presentation at the ClarinetFest. I just came across a copy of an undated letter to Bonade from his student Robert McGinnis about his audition for Leopold Stokowski, music director of the Philadelphia Orchestra. It was probably written about 1930, the year McGinnis entered the orchestra. He started as third clarinetist, and then moved to principal, when Louis DeSantis left.

Well I played for Stoky this morning. I thought I'd write you cause I couldn't hold it until Saturday. The reed still worked good and I played quite well and he was quite pleased and said he was petty sure I'd do. There are some catches in it tho cause he wants me to play again in 2 weeks and wants me to practice certain things. He said I must have first good tone, good phrasing and most important of all to do just as he signs without being talked to. For the next audition I must develop a vibrato for certain places, play much more freely and be careful not to go flat in crescendos. All I played was Don Juan, Unfinished Symphony, and Venusberg Music and Scheherazade. He made me play so loud that even a tuba would have gone flat under the pressure and I had an awful time trying to make a vibrato. And of course I must play more freely and flexibly. I think all that can be taken care of if I can only discover how to make a vibrato.

What makes me feel the chances are good is that he asked me if I knew anybody for 2nd or 3rd and so I told him about Collis. He told me not to say a word to anybody about this and so I won't tell Collis but you could easily start preparing him without telling him for a while. I'll give you the details on Sat. when I see you and you better bring an extra vibrato with you. My best wishes to Mrs. Bonade and I'll see you soon.

If you want to know more about Bonade and McGinnis and Stokowski, check out this link.

Posted by Shannon Thompson at 4:59 PM No comments:

The Reed (and Barrel!) Project

I've been meaning all year to put up a posting about custom reed maker Brian Hermanson, who came to our neck of the woods last summer with his wife Alice Ann. It's not everyday that you find a professional clarinet reed maker within easy driving distance, particularly when you live in a fairly remote mountain hideaway like Cullowhee, North Carolina.

Brian happens to be a fine clarinetist with a brilliant mind, who thinks deeply about sound and discovers how to manipulate it through reed design and other factors. I got him to teach our single reed making class this semester, which I also attended, and he took the class to a whole other dimension of really analyzing your sound and the reed's anatomy. Check out Brian's Facebook page to learn more about him.

In the fall, Brian designed a reed for me that I named the "Chicago" for the Chicago Kaspar 11 that I am currently playing (thanks to Ramon Wodkowski's amazing mouthpiece refacing). Since then, I've had the joy of getting together with Brian every couple of weeks to try his new reed designs and new barrels that he is beginning to make. I'm using one of his barrels now, which is made out of bubinga wood, and having a good time trying out the others he's made since. His barrel making activity has inspired me to get Eldred Spell (piccolo headjoint maker and WCU flute colleague) to find my box of mountain mahogany barrel blanks and start experimenting with clarinet barrel making again. The first time we did this, I took the first barrel Eldred made for me (that wasn't seasoned or treated or anything) to Utah, where it shrunk in the low humidity and heat to about 3/4 its size!


Back to reeds: I've been playing Brian's reeds exclusively since October, and some of my colleagues in the Asheville Symphony and our students are also playing his reeds. See reedproject.org for his website store. He's working on several designs with people, and he also has a couple of production designs that he sells: the Chicago and the BCR. Brian made up boxes of what we call "No Bite" reeds for my students that are a special system he invented that builds up your embouchure so that you learn to avoid biting on various registers and intervals. I use them myself whenever I feel that I'm getting away from the embouchure control that I need.

Another embouchure building tool that I've been using lately is the Facial Flex. I got the idea from an article Larry Guy wrote on embouchure, and the device really does seem to help you build up the muscles of your lip from the side. The Facial Flex is a popular wrinkle remover device of dubious reputation that I doubt has any positive effect on one's facial appearance. Fortunately, using it to build up certain embouchure muscles on the clarinet really does work, but I wouldn't recommend using it in public!

Posted by Shannon Thompson at 10:53 PM No comments:

This Time of the Year - Part 2 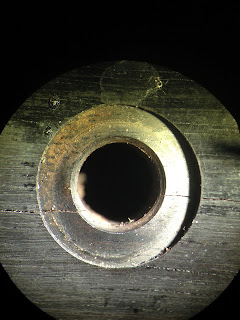 I discovered a crack in my clarinet this week. That makes four Bb clarinets in a row for me. Three of which were probably brought on by the horrible conditions of the non humidity controlled building in which I work. That and scheduling recitals in February. Since it's been two and a half years since I got this clarinet, I thought it was "seasoned" enough to not crack, but I was wrong.

I thought of repairing the crack myself, but then I got wise and did what any intelligent person within driving distance of Eldred Spell would do: I packed up my clarinet and a bottle of ultra thin super glue and headed for Eldred's house. Eldred is the master of fixing such things, and these photos prove it. It was both interesting and disheartening to see the extent of the crack through a microscope.

I am sure that someone out there is going to really appreciate my valentine gift of a transposition of the bass clarinet part to Richard Wagner's Prelude and Isolde's Love Death (Liebestod) from Tristan and Isolde. The original part is for bass clarinet in A in bass clef. Unfortunately, I received a pristine part, with no markings on it to indicate any notes, even though I'd played the piece with the same orchestra a few years earlier. I searched my library and the internet in vain looking for a transposed part. I would have been happy to pay someone just to not have to deal with the transposition myself. I'm okay reading bass clef transposition and I'll deal with A transpositions in treble, but when you put the two together, it's a royal pain. Rather than marking up the part again and stressing through the rehearsals concerned that I'd flub a transposition, I went ahead and put it all into Finale. It took me 4 1/2 hours because I'm not a Finale pro.

So here it is, my masterpiece, guaranteed note correct and completely readable, since I just used it in my performance with the Asheville Symphony last night. You can download a pdf of the part here. 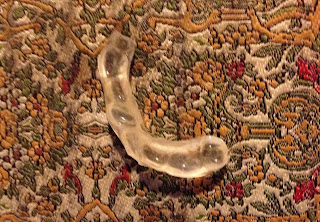 Because of a venous malformation that I was born with in my upper gum and lip, I am missing some of the bone I need above my front upper teeth to counter the weight that pushes in from the clarinet. Back in 2004, when I experienced some loosening of one of my teeth and pain while playing, I consulted the experts at the University of North Carolina Medical and Dental Schools in Chapel Hill. Dr. Minsley, the prosthetics expert at the dental school designed an acrylic tooth guard for me to use while playing. It broke after three years of heavy playing, and Dr. Minsley made me a couple of more. Since then, I have relied on my local dentist, Dr. Patrick McGuire, to refit these for me whenever needed. I've been using these devices practically every time I put the clarinet into my mouth. As a result, I’ve had no further problems with pain or loosening teeth.

The photo at the right is of my newly refitted tooth guard, ready for practice. I have is to remember to keep this with me no matter what clarinet I play. I have to store the devices in water because they are acrylic and will become brittle if they dry out too much, so my reed water cup doubles as a tooth guard holder. It is a pain to have to put this in and out of my mouth all the time and I have to talk a little differently when it is in. No matter how careful I am, I often forget where I put it down in lessons, and some of my students know to remember where it is, so they can remind me when I forget! I can play a few bars without it and sometimes I warm up using double lip instead, but I would never choose to play without it at a rehearsal or performance. I am sure it seems like a lot of trouble to others, but for me, this tooth guard is a great blessing. It has saved my clarinet playing.
Posted by Shannon Thompson at 5:16 PM No comments: